Eighty-two years ago today, on February 18, 1930, Clyde W. Tombaugh discovered planet Pluto, the tenth planet from the Sun. Pluto is commonly known as the ninth planet, but that is based on the erroneous demotion of Ceres in the 19th century, before Ceres was recognized as being spherical and therefore a small planet.
Two days ago, on February 16, New Horizons Principal Investigator Dr. Alan Stern gave an update on the mission at the Weekly Space Hangout, which can be viewed in its entirety here: http://www.youtube.com/watch?v=Fk8LUI1A6TQ&feature=player_embedded . During the broadcast, Stern also discussed several other issues including NASA’s new budget. Those watching live had the opportunity to tweet questions to Stern and to several other astronomers linked to the broadcast.
Stern also urged everyone to sign the Care2 petition for a New Horizons US stamp. Anyone can sign; you don’t have to be a US citizen or even over 18. The link, once again, is here: http://www.change.org/petitions/usps-honor-new-horizons-and-the-exploration-of-pluto-with-a-usps-stamp
Tombaugh was 24 years old with only a high school diploma when he discovered Pluto, a planet missed by professional astronomers who had been searching for it, including Percival Lowell himself. Lowell, who died thinking he failed to discover a trans-Neptunian planet, actually had captured images of Pluto on photographic plates in 1915 and 1916 but didn’t recognize the small object as a planet, much less the gas giant for which he was searching.
In online discussions, professional astronomers who disagree with me often resort to the old standby, “You’re only an amateur astronomer.” I don’t claim to be anywhere in the league of Clyde Tombaugh, but this insulting comment demeans all amateur astronomers, who have a long legacy of past and present astronomical discoveries. Amateur astronomers also tend to have a broader view that encompasses many fields within astronomy as opposed to a very specialized focus in one area to the exclusion of all others. And they are usually the ones who communicate astronomy with the public.
Today, through computers and relatively inexpensive telescopes, there are more opportunities than ever for amateur astronomers to make significant discoveries. Clyde Tombaugh’s accomplishment remains an inspiration to all who seek new discoveries, regardless of whether they are paid to do astronomy or do it as a labor of love.
The planet Tombaugh discovered is now known to have four moons, and the New Horizons team is preparing for the possibility that it might also have a ring system. This is important because at the spacecraft’s speed, it cannot afford an impact with even a small ring particle. If a ring system is found, New Horizons’ trajectory will be slightly altered to avoid the possibility of such an impact.
Planet Pluto’s discovery excited the world 82 years ago, and today, this little planet continues to enchant and surprise us. Is it any wonder that the attempt to demote it, done mostly by astronomers who do not study planets, has never really stuck?
In his talk, Stern made some insightful comments about Pluto’s status. Here are some of them.
“The solar system made a lot more planets than we learned about in grade school. The solar system is teeming with planets.”
“It was a great tragedy when the press so readily accepted the IAU definition.”
On the benefits of a geophysical planet definition: These small spherical bodies are “gravity-dominated as opposed to strength-dominated, like a rock (asteroid).”
Stern continues to reject the notion of a small group of self-selected experts voting on science.
“This 19th century way of doing things—old guys in a closed room—is not the way to go. We’ve got to go with what people think.”
This statement shows respect for public opinion while at the same time noting that facts, not a backroom door vote, is what determines reality. The days of professional astronomers guarding their knowledge and keeping it from the general public as some sort of elite society are long over. Some professional astronomers seem to have a hard time accepting that change.
To commemorate this day of discovery, here is an image from 1930 announcing the new planet: 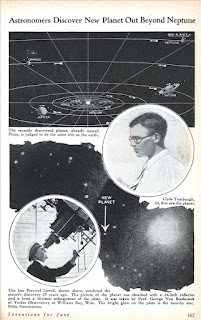 And here is Pluto today, a planet with four moons: 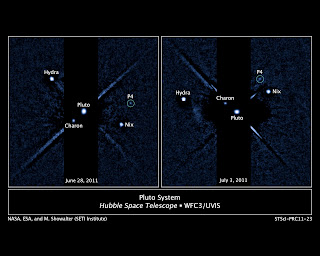 We can only imagine what the early photos from New Horizons will show us in just three years.
For now, Happy Anniversary of Discovery Day, Planet Pluto!
Posted by Laurel Kornfeld at 4:23 PM 2 comments:

Please sign the petition at this site in support of a postage stamp honoring the New Horizons mission. You do not have to be an American citizen to sign; anyone from anywhere in the world is eligible to sign it.

Also, note the support of the stamp and of Pluto's planet status by Dave Eicher of Astronomy magazine here: