Posted by Laurel Kornfeld at 11:34 PM No comments:


Posted by Laurel Kornfeld at 11:26 PM No comments:

Anyone interested in Pluto should take the time to read this fantastic article. Dr. Philip Metzger is a planetary scientist at the University of Central Florida and recently retired from NASA's New Horizons communication team. In his articles, he has consistently made some of the strongest arguments I have read in nearly nine years in support of Pluto's planet status.

"So start calling Pluto a planet right now. Add to the consensus, because that's how science makes progress, by one person at a time being convinced of the truth and adopting it. Science is not decided by votes and you are not required to submit to nonsense."
Posted by Laurel Kornfeld at 8:43 PM No comments:


Posted by Laurel Kornfeld at 3:21 PM No comments:


New Horizons is an exciting science mission, but it and the small planet it is visiting have always been something more, something transcendent, something that has and continues to inspire art in all its forms. This beautiful song written by folk musician Craig Werth, called "Oh, Pluto," reflects the sense of wonder, mystery, and fascination that both Pluto and New Horizons continue to generate. As Universe Today writer Nancy Atkinson says, "Oh, Pluto will tug at your heartstrings."


Posted by Laurel Kornfeld at 1:47 PM No comments:

New from NASA's New Horizons: Increasing Variety on Pluto's Close Approach Hemisphere, and a 'Dark Pole' on Charon
Posted by Laurel Kornfeld at 8:57 PM No comments:

Pluto and its Moon Charon, Now in Color

Pluto and its Moon Charon, Now in Color
Posted by Laurel Kornfeld at 12:55 AM No comments:


In order to participate, you need to visit the website listed in the photo. When you get to the site, request participation. 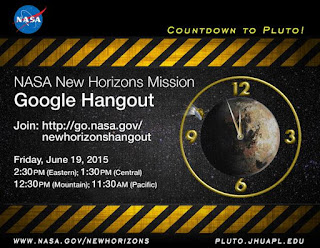 Posted by Laurel Kornfeld at 4:20 PM No comments:

One Month Out: It's Beginning to Look a Lot Like Pluto


It is now less than a month until New Horizons encounters Pluto, and like a rock star, Pluto is everywhere in the media. Articles, videos, animations, and images are coming so fast that it feels nearly impossible to keep up with them all.


Pluto is the cover model for the magazines Astronomy http://www.astronomy.com/magazine/press-releases/2015/05/july-2015 , Sky and Telescope http://www.skyandtelescope.com/sky-and-telescope-magazine/inside-the-july-2015-issue/ , Nature http://www.seti.org/seti-institute/behind-the-scenes-pluto-system , National Geographic http://press.nationalgeographic.com/ , and New Scientist http://www.newscientist.com/issue/current as well as the highlight of countless websites.


Let me know if there are any Pluto magazine covers I've missed!


Slowly, the small planet is beginning to give up its secrets. Images taken by New Horizons’ Long Range Reconnaissance Imager (LORRI) show Pluto’s surface to be one of high color contrast, with bright regions, dark regions, and intermediate regions. This matches our best Hubble images, which though blurry, show great a planet with a very contrasted surface.


Significantly, Pluto appears to have a polar cap! That makes it one of only three solar system planets to have polar caps—the other two being Earth and Mars.


Studies of the Pluto system’s four small moons indicate they have odd, tumbling orbits, caused by the fact that they orbit two bodies—Pluto and Charon. These dynamics affirm we are looking at a true binary planet system—the only one in our solar system.


Astronomers who study binary stars have been inspired by Pluto-Charon, thinking of it as an analogue to the systems they research, only much clo
The Pluto system has even been seen as an analogue of Jupiter and the Galilean moons. Three of those four moons, Io, Europa, and Ganymede, orbit Jupiter in the same resonance as that at which the small moons orbit Pluto-Charon, repeating the same cycle again and again.


Like Pluto’s small moons, all four Galilean moons never all line up at the same time. This configuration helps stabilize their orbits by minimizing the gravitational strengths between the satellites.


And this is only the beginning…

In early July, New Horizons will begin spectroscopy, which will identify the composition of Pluto’s surface. Then comes mapping of Pluto and Charon, study of atmospheric patterns, and measuring the solar wind, high energy particles, and dust particles in the environment around Pluto.


Recordings of the updates are also posted on NASA’s YouTube channel at https://www.youtube.com/channel/UCLA_DiR1FfKNvjuUpBHmylQ .


From July 13-15, I will be at Johns Hopkins University Applied Physics Lab (JHUAPL) for events surrounding the flyby as a correspondent for Spaceflight Insider. Of course, I will also be posting on this blog.


Naturally, with so much attention on Pluto, the issue of its planet status is coming up a lot. The diehard supporters of the IAU decision are going on record stating how interesting Pluto will be, how much they love Pluto, how much they are looking forward to the flyby—but no matter what is learned, Pluto will never be a planet because it does not “clear its orbit.”


But many more are questioning just what “clearing its orbit” means. Looking at what is clearly a binary system, a primary object with a polar cap and one of the most complex, contrasty bodies in the solar system, they do not see something that is just one of many rocks or “dirty snowballs” among thousands in the Kuiper Belt.


They see a system that is unique and in some ways more like Earth than any other solar system planet.


Is Pluto’s status a separate issue from its science? That is a matter of opinion, but I say no. The science—not a tiny group of “experts”—will tell us what this object is. And those doing that science, obtaining this data for the first time in human history, are the ones who will write the textbooks about Pluto.


In 85 years, we’ve gone from a tiny dot to not just a world but a complex system.

When I go to JHUAPL next month, there will be a personal sadness I never could have anticipated. I had been rooting for the late Patsy Tombaugh to get her wish of living to see the flyby. She would have been 102. Sadly, she died in January 2012 at age 99.

But I never expected my dad to not make it to the flyby. He would have been 83 and was vibrant and healthy until an unknown illness that we suspect to be myeloma snuck up on him and took him from us on March 19 of this year.


Only a few days before he fell into a coma, he had asked me, “How’s Pluto?”
I want to imagine him watching the flyby along with the Tombaughs, Venetia Burney Phair (the little girl who named Pluto), and so many other Pluto huggers who have passed on in luminous forms, at one with the Force, much like Obi Wan Kenobi, Yoda, and Anakin Skywater appeared in the victory celebration at the end of Return of the Jedi.


May the Force be with New Horizons and with the entire Pluto system!
Posted by Laurel Kornfeld at 12:55 AM No comments:


Posted by Laurel Kornfeld at 4:21 PM No comments:

The Year of Pluto Promo

Posted by Laurel Kornfeld at 12:46 AM No comments:


Posted by Laurel Kornfeld at 11:38 PM No comments:

Published on Jun 9, 2015Follow New Horizons on its incredible journey as it nears the edge of the planetary system and speeds toward a historic July 14 flyby of Pluto. We don’t know what we’ll learn about Pluto and its moons—all the science team is predicting is to “expect to be surprised.” In this four-part series you’ll hear from the scientists and engineers behind New Horizons, as they set the stage for encounter. Topics include a mission and science overviews, a look at the spacecraft and its seven science instruments, and what we know about Pluto to date. Part 1: Mission Overview
Posted by Laurel Kornfeld at 12:33 AM No comments:


It’s a preview of all things Pluto! New Horizons is the focus of the next NASA Social event, on Saturday, June 6, at 1 p.m. EDT, and you can watch it live on NASA UStream, here: http://www.nasa.gov/multimedia/nasatv/index.html . This preview of the mission and its historic flyby of Pluto actually takes place in two locations: Lowell Observatory in Flagstaff, Arizona – where Pluto was discovered in 1930; and the Johns Hopkins University Applied Physics Laboratory in Laurel, Maryland – home to mission management and New Horizons spacecraft operations. The broadcast, originating from APL, will include looks at mission science, the spacecraft, Pluto flyby plans, and a preview of the Eyes on the Solar System’s special Pluto Encounter mode here: http://eyes.nasa.gov/

Follow along on NASA TV here: http://www.nasa.gov/multimedia/nasatv/index.html and online at https://twitter.com/NASASocial. 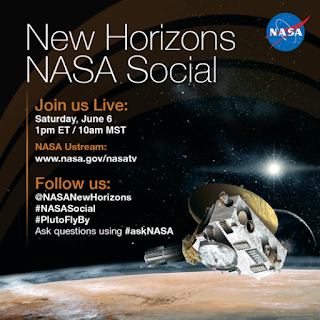 Posted by Laurel Kornfeld at 11:35 PM No comments:

For those who cannot attend, recordings of Google Hangouts are usually posted online after the live broadcast.
Posted by Laurel Kornfeld at 2:05 PM No comments: