Can it really be a year since that fateful, long-anticipated, wondrous day, July 14, 2015, when New Horizons flew by Pluto, giving humanity its first detailed glimpse of that mysterious world? One commenter on Facebook said it seems like just a few months, a sentiment that I share.

One year ago, after a journey of nine-and-a-half years and three billion miles, the world witnessed the culmination of a dream that began 25 years earlier and of two-and-a-half decades of persistence by Pluto scientists to make that dream a reality.

One year ago, on one of the most exciting days of my life, I joined thousands of cheering supporters in a New Year’s Eve-style countdown beginning with “9” instead of “10,” to 7:49 AM, the moment of the spacecraft’s closest approach. About 13 hours later, I celebrated with a tired but exuberant crowd at mission headquarters in Laurel, Maryland, as the spacecraft’s signal that it had successfully traversed the Pluto system arrived.

I was blessed to have the opportunity to cover the mission for the website “Spaceflight Insider,” which allowed me to attend as media and spend the interim hours in the media area, both writing and talking with scientists and journalists from around the country and the world. 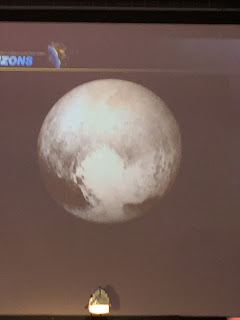 After the moment of closest approach had passed, the New Horizons team shared a fascinating finding with us. It was official: Pluto is bigger than previously thought, marginally bigger than Eris. In the long run, that might seem trivial, but it put a definitive end to the claim that Eris is bigger, and if it cannot be classed as a planet, neither can Pluto. The 2006 estimates of Eris’s size were wrong; Bruno Sicardy’s 2010 measurements were correct.

We also were shown the last photo of Pluto sent back before the encounter, so in case the worst happened, and the spacecraft was destroyed by impact with debris, at least the mission had some images successfully returned.

It was a beautiful image, with the heart feature, Tombaugh Regio, front and center.

Since then, Pluto has continually surprised everyone, both scientists and lay people. Numerous predictions were proven wrong. Pluto is not a highly cratered, dead world but a geologically active one. Its atmosphere is not escaping as it recedes from the Sun. It has floating mountains and glaciers, ice volcanoes, and very likely a subsurface ocean.

Pluto’s interaction with the solar wind is far more like that of the larger planets than like that of a comet.

Ironically, every discovery has seemed skewed toward the characteristics of planet, almost as if Pluto itself were having the last laugh in response to a small number of astronomers who attempted to classify it without even seeing it.

And the world became enchanted with Pluto, which made the covers of numerous newspapers and magazines. Even Google did a special doodle for the flyby. 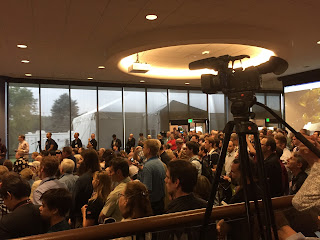 The only ones who didn’t seem impressed were those who attended the IAU General Assembly one month after the flyby. Their biggest concern was that the New Horizons team was using names for sites on Pluto and its moons without “official” IAU approval.

Those wedded to the notion that a planet must “clear the neighborhood of its orbit” wrote numerous articles stating that the flyby showed an object does not have to be a planet to be interesting. And therein, they missed the point. All the features and processes revealed by New Horizons are those of planets. Yet somehow, none of these intrinsic factors matter to those whose minds are made up.

By making “clearing its orbit” a requirement for planethood, four percent of the IAU essentially assured that no matter what is happening on Pluto’s surface and atmosphere, no matter what the New Horizons mission found, Pluto would forever be precluded from being classed as a planet and their position would always “win.”

That might be a clever political move, but it certainly is not a smart scientific one, especially since it amounts to reaching a conclusion first and only afterwards making sure the evidence fits that desired conclusion.

The fact that New Horizons flew by the Pluto system without encountering any debris actually calls the claim that it doesn’t clear its orbit into question. Pluto’s immediate vicinity was likely cleared of debris by its large moon and binary companion, Charon.

An “un-cleared” orbit calls to mind the asteroid field navigated by Luke Skywalker in The Empire Strikes Back, where the Millennium Falcon has to weave and dodge to avoid hitting the many asteroids clustered together. This was hardly the case for New Horizons as it flew through the Pluto system.

One has to ask, do those who require “orbit clearing” see the entire Kuiper Belt as Pluto’s “neighborhood?” The Kuiper Belt is huge, most of it stretching far beyond Pluto. The New Horizons team needed to use the Hubble Space Telescope just to find an object on the spacecraft’s trajectory to visit after Pluto, and that object is a billion miles beyond the planet!

Eighty percent of the data from last year’s flyby is now back, and the remaining 20 percent is expected to be returned sometime this fall.

Pluto so thrilled and excited the world that there already has been talk of returning, this time with an orbiter. Principal investigator Alan Stern told the audience at this spring’s Northeast Astronomy Forum (NEAF) that the technology for an orbiter already exists.

To get the ball rolling on a potential orbiter, advocates need to make it a priority in the next Decadal Survey, a list of goals prepared under the guidance of the National Research Council once every ten years.

NASA will start outreach to the council in 2018 or 2019 to begin this process, with the next Decadal Survey expected to be released in 2022. This means it is not too early to start seriously advocating a return to the Pluto system.

“I think the excitement is there, the details, in terms of the science, will come out…and they’re going to be pushing for what might be the next steps, you bet.”

For now, to celebrate this momentous anniversary, the New Horizons mission has published a list of its top 10 Pluto pictures, a survey of its top ten discoveries from the flyby, and a stunning video compiled from more than 100 images taken during approach simulating what one would see upon arriving at the planet.

“Just over a year ago, Pluto was a dot in the distance. This video shows what it would be like to ride aboard an approaching spacecraft and see Pluto grow to become a world, and then swoop down over its particular terrains as if we were approaching some future landing on them,” Stern said.

http://www.nasa.gov/feature/new-horizons-imagining-a-landing-on-pluto
Posted by Laurel Kornfeld at 12:00 AM No comments:

New Horizons Receives Mission Extension to Kuiper Belt, Dawn to Remain at Ceres: Following its historic first-ever flyby of Pluto, NASA’s New Horizons mission has received the green light to fly onward to an object deeper in the Kuiper Belt, known as 2014 MU69.
Posted by Laurel Kornfeld at 4:15 PM No comments: