86 Years After Discovery, Data Shows Pluto is a Planet

Today marks the 86th anniversary of the discovery of planet Pluto in 1930 by 24-year-old Clyde Tombaugh at the Lowell Observatory in Flagstaff, Arizona.

Sometime around 4 PM on that day, while using a blink comparator to move between two photographic plates depicting the same part of the sky taken several days apart a month earlier, Tombaugh detected a tiny dot that moved against the background stars.

That dot was Pluto. The fascinating story of its discovery is described here: http://pluto.jhuapl.edu/Participate/learn/What-We-Know.php?link=Discovery-of-Pluto .

Over the past year, we have had the opportunity to do what Clyde Tombaugh could only dream of—transform that tiny dot he found, not even large enough to be resolved into a disk with the most powerful telescopes of the day—into a living, breathing planet.

We are now into the “Year of Pluto 2,” and the amazing images and information keep coming and will continue to do so through most of this year.

This anniversary is an appropriate occasion to re-examine, in light of all these new findings, the claim that Pluto is somehow “different” from the solar system’s eight larger planets. 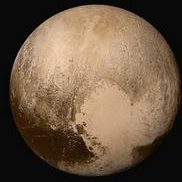 Let’s start with the often repeated, “Pluto is very different from the ‘big eight.’”

First, there are no “big eight,” unless one lumps together two very different types of worlds—the rocky, terrestrial planets on one hand, and the gas giants and ice giants on the other.

Any classification system that puts Earth and Jupiter in the same category but excludes Pluto overlooks an important fact, specifically, that Earth has far more in common with Pluto than it does with Jupiter.

Gas giants Jupiter and Saturn and ice giants Uranus and Neptune have no known solid surfaces. Both have extensive systems of rings and moons that are almost their own “mini-solar systems.” Jupiter and Saturn are composed primarily of hydrogen and helium, much like the Sun.

Like Earth, Pluto is rocky and geologically differentiated into core, mantle, and crust. Like Earth, it is geologically active. It has far more water ice than previously thought, and its geological processes suggest an internal heat source that could possibly support a subsurface ocean.

Some scientists see evidence for such an ocean in the faults and fissures on Pluto’s surface and in the planet’s lack of an equatorial bulge.

Equatorial bulges are created by the spin of rotating spherical objects. Because water moves more easily than ice, an underground ocean would reduce any bulge by acting against rotational forces.

Both Earth and Pluto have nitrogen in their atmospheres. The only other solar system world with a nitrogen atmosphere is Saturn’s moon Titan.

Both Earth and Pluto have large moons formed via a giant impact very early in the solar system’s history.

Pluto was initially thought to be larger than it is because until 1978, scientists did not realize they were looking at two objects rather than one when they observed Pluto through a telescope. The planet and its largest moon Charon, which is half its size, are separated by just 12,196 miles (19,640 km), the smallest separation between any planet and moon in the solar system.

And because Pluto and Charon orbit a center of gravity, known as a barycenter, outside of Pluto, between the two objects, they can genuinely be considered a double or binary planet system.

New Horizons’ findings indicate Pluto actually has more in common with Earth than anyone imagined.

Instead of the dead world many expected, Pluto has revealed itself to be “a world of unexpected complexity and riches,” mission principal investigator Alan Stern commented.

Among the small planet’s stunning array of terrains are wind-blown dunes similar to those on Earth and on Jupiter’s moon Europa. Worlds with atmospheres as thin as Pluto’s do not usually have dunes, suggesting Pluto’s atmosphere may once have been a lot thicker.

Pluto’s famous “heart,” named Tombaugh Regio for discoverer Tombaugh, has a young surface with no craters.

Ice floating on the left side of side of Tombaugh Regio, known as Sputnik Planum, flows in a manner similar to the movement of glaciers on Earth. Only two other worlds in the solar system, Earth and Mars, experience this type of activity.

The fact that Sputnik Planum’s terrain is constantly being reshaped suggests tectonic forces (geological forces that cause movements of a planet’s crust) are at work, possibly caused by internal heating produced through radioactive decay of rocky material in Pluto’s core.

“The Pluto system surprised us in many ways, most notably teaching us that small planets can remain active billions of years after their formation,” Stern said.

Pluto’s layered, atmospheric haze is similar to that seen on Titan. It is also far more complex than scientists anticipated.  Pluto’s sky appears blue at sunrise and sunset because its haze particles scatter blue light. Which other planet has a blue sky?

Two mountains on the Pluto’s encounter side (that observed in most detail by New Horizons), Wright Mons and Picard Mons, appear to be ice volcanoes, also known as cryovolcanoes. These mountains have broad, gentle slopes, characteristic of what are known as shield volcanoes.

The only other shield volcanoes in the solar system are on Earth and Mars.

Pluto’s active geology and possibly cryovolcanism could be driven by a mix of ammonia and water ice in its mantle.

Located between the inner crust and outer core, that mantle may be experiencing convection, a process through which hot material rises up while cooler material sinks down.

On Earth, convection drives the movement of tectonic plates.

The point in emphasizing these detailed features is that Pluto may have more in common with Earth than with any other solar system planet.

The abundance of water ice on its surface and the possibility of a subsurface ocean add Pluto to the solar system’s leading contenders for microbial life, a list that includes Europa and Saturn’s moon Enceladus, both of which are believed to have subsurface oceans.

Data sent back by New Horizons just this week indicates Charon, which is also geologically active, once had a subsurface ocean too.

Nine and a half years ago, four percent of the IAU decided they knew how to best classify Pluto in spite of the fact that they had never seen it up close and knew nothing of its features. Even today, apologists for the IAU claim that their decision stands, that Pluto is not a planet because astronomy’s “ruling authority” said so.

Yet Pluto’s surface and atmosphere tell a very different story.

"I naturally refer to Pluto as a planet because that seems like the right moniker,” New Horizons project scientist Cathy Olkin states. “It has an atmosphere; it has interesting geology; it orbits the sun; it has moons. ‘Planet’ just seems right to me."

If Clyde Tombaugh had lived to see the glorious beauty of the tiny dot he discovered, he would have been truly amazed.

Posted by Laurel Kornfeld at 11:55 PM No comments: