New Horizons' Year is about to Begin


Here is a message from Principal Investigator Alan Stern:

And don't forget that the Dawn mission to Ceres will also be happening in 2015.
http://www.nasa.gov/jpl/dawn/dawn-spacecraft-begins-approach-to-dwarf-planet-ceres/


“Dark ruled the Earth, and death has reigned
But on the wheel does spin!
From out the womb of night is birthed the infant Light!
The Sun has come again!”

We have once again come to the Winter Solstice, one of the most powerful, most profound, most sacred moments of the year—one of the few times an astronomical event captures the attention of people who rarely pay attention to astronomy.

This year, the Winter Solstice falls on the same day as the new Moon. For about three days, the Moon disappears from the night sky as it seemingly wanes into nothingness; then it becomes “new” again as a thin crescent appears in the western sky.

Similarly, the Sun at its lowest point appears to stand still for about three days before reversing course and beginning its journey northward on the celestial sphere.

For those of us who have waited nearly a decade to see the first up close pictures of Pluto, asking repeatedly, “Are we there yet?” it is not just another Solstice, not just another New Year. As the New Horizons mission team puts it, we are “On Pluto’s doorstep.”

The spacecraft’s first observations of Pluto will begin within weeks and progressively get better as New Horizons closes in on the small planet. By April or May, we will begin seeing images of Pluto better than any taken by the Hubble Space Telescope.

On Earth, the Winter Solstice is when darkness in the Northern Hemisphere reaches the peak of its power and subsequently begins to wane. For millennia, it has been celebrated around the world as the birthday or rebirth of the Sun, a metaphorical journey from death to new life.

Today, even though we know that the Sun doesn’t change, that only our perspective of it experiences an apparent cycle of birth, growth, death, and rebirth, many still find deep meaning in commemorating the occasion.

As someone who loves symbolism, I see this year’s Winter Solstice as symbolic of many people’s wishes for Pluto.

In August 2008, on the second anniversary of Pluto’s wrongful demotion by four percent of the IAU, I printed a poem here called “The Death of Pluto,” which writer Robert Croog adapted from the original, “The Death of Tammuz.” That entry can be found here: http://laurelsplutoblog.blogspot.com/2008/08/two-years-later-not-gone-not-forgotten.html .

The poem, written a century ago, referred to the Babylonian vegetation god Tammuz, who was believed to die in the hot dry weather following the Summer Solstice, whose demise was mourned as the departure of summer.

Croog substituted the name “Pluto” for “Tammuz,” evoking that same sense of grief in response to a statement by Eris co-discoverer Mike Brown, who stated, “Pluto is dead.”

Significantly, Tammuz, being a solar deity, was seen as being annually reborn at the Winter Solstice.

To me, late August and September are a time tinged with sadness. It is always painful to see summer end. That is probably why I love the Winter Solstice so much—it comes to reverse the death and loss that began more than three months earlier.

Ironically, the IAU vote that demoted Pluto occurred just at the time of grief for the loss of summer, the time when, in many cultures, gods associated with the Sun and with vegetation, began to die.

Pluto symbolically “died” with summer, and this year, which starts as the Sun begins its apparent “ascent” from its nadir, is the year that will empower Pluto’s restoration to planetary new life. The images, the data, the revelation of this new world that New Horizons will send back to us will empower Pluto’s “rebirth” as a full-fledged solar system planet.

And just like our perspective of the Sun rather than the Sun itself is what changes throughout the year, in 2015, our perspective of Pluto will change. Already, people are looking at this complex world with five moons, an atmosphere, even a possible sub-surface ocean, as something that is obviously a planet. From scientists at Harvard to fifth graders in a Kansas classroom, the tide in favor of Planet Pluto and against the IAU vote, is growing.

Writer Philip Brown (no relation to Mike Brown), who in 2006 quoted Croog’s adaptation of “The Death of Tammuz” poem, wrote at the time, "I am inspired by this poem and its themes which are symbolic of Pluto: death, youth, hidden and mysterious places, occult energy and return to the Earth, decay and regeneration in nature, and a playful sense of foreboding. It is apropos of Pluto's recent demotion from planetary status, and the comments of Mike Brown."

Philip Brown discussed only the death aspect of the Tammuz mythology, not the rebirth. But half a story is just that—part of the whole, not the whole itself. Myths about death and rebirth, nearly universal, tell us all life is a cycle, that nothing ever is really lost, only transformed.

Like the Sun, Pluto never died and never changed. But just like we perceive the Sun to undergo transformation from a dying old man to a newborn baby (think Father Time and the Baby New Year), many perceive Pluto to have “died” as a planet.

This New Year begins the recognition of Pluto’s planetary rebirth. Tonight, at the dark of the Moon and the dark of the Sun, Pluto Eve gives way to the Year of Pluto. The light is about to shine on a very dark and mysterious world.

Posted by Laurel Kornfeld at 1:24 AM No comments:


The New Horizons team will conduct an online workshop tomorrow, Thursday, December 18, from the fall meeting of the American Geophysical Union. Titled "On the Eve of Encounter: New Horizons at AGU, the workshop will be broadcast at 2:30 PM EST (11:30 AM PST).

More information is available at the New Horizons web site at http://pluto.jhuapl.edu/news_center/news/20141217.php

A similar workshop on the Dawn mission to Ceres will be broadcast from the AGU's fall meeting half an hour earlier, at 2 PM EST (11 AM PST). Follow that webcast here:
http://live.projectionnet.com/AGUPress2014/FM2014.aspx 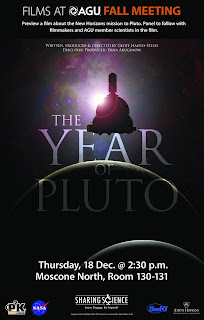 Posted by Laurel Kornfeld at 11:57 PM No comments:

Wed, Dec 10, 4:00 PM - 5:00 PM EST (remember to adjust for time zone differences).
Hangouts On Air - Broadcast for free
New Horizons just woke up from its long nap, and now it's just a few months away from reaching Pluto.

Join New Horizons' Primary Investigator +Alan Stern, as well as other members of the science team to discuss the status of the mission so far and the next big events that will happen with New Horizons.

This will be your chance to hear directly from the New Horizons team, and we'll be glad to take any mission-related questions you might have.

Waking Up On Pluto's Doorstep: New Horizons Comes Out of Hibernation


http://www.ibtimes.co.uk/new-horizons-pluto-planet-always-has-been-1478073
Posted by Laurel Kornfeld at 3:15 PM No comments: