Pluto's glaciers change with its seasons

Pluto's glaciers change with its seasons
Posted by Laurel Kornfeld at 3:00 PM No comments:

The Passage of Time Doesn't Make Something Right 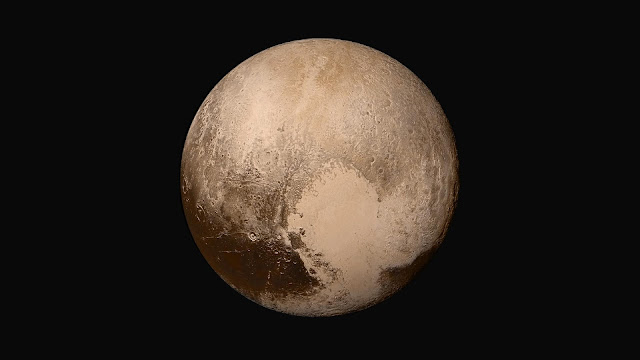 It’s hard to believe 14 years have passed since that fateful day, when 424 IAU members presumed—wrongly—that they could speak for seven billion people on Earth, erroneously hijack a term coined by Alan Stern back in 1991, and dictate to the world that Pluto is not a planet.

The world wouldn’t have it.

Almost a decade and a half later, support for the alternative geophysical planet definition is only growing. Nothing hurt the planet definition adopted by four percent of the IAU more than the images and data New Horizons sent back from its reconnaissance of Pluto. Those images and data show an abundance of planetary processes, including active geology, layered hazes in Pluto’s atmosphere, interaction between Pluto’s atmosphere and surface, windswept dunes, flowing glaciers, cryovolcanism, and very likely a subsurface ocean.

With New Horizons’ findings, Pluto joins the growing list of ocean planets—worlds with subsurface oceans that could possibly harbor microbial life. Regardless of whether they are planets or moons, these worlds deserve a planetary subclass of their own, as they share the most unexpected of features—an underground ocean.

In spite of the new data, the IAU has done nothing to correct its error or even update resolution. More than 4,000 exoplanets have been discovered, yet the IAU has never taken any action toward defining them. Its planet definition requires an object to orbit the Sun rather than a star, meaning none of these 4,000 worlds count as planets. Neither do rogue planets, which cannot “clear their orbits” because they have no orbits to clear.

There are always people who make the argument that supporters of Pluto’s planethood should “let it go” because so much time has passed since the 2006 vote. That assumes the passage of time makes something wrong become right, which is a fallacy. Not only does the passage of time not change a wrong decision; knowledge gained over that time period actually strengthens the case that the decision was wrong.

It is the New Horizons team who are writing the textbooks about Pluto, and they see their flyby target as a planet. Their book, The Pluto System after New Horizons, will be published on December 8 of this year. It will be the most comprehensive study of Pluto until we follow up the flyby with an orbiter.

NASA is already funding a study by the Southwest Research Institute (SwRI) to explore the feasibility, nature, and cost of returning to Pluto with an orbiter. Unlike New Horizons, which could only photograph one side of Pluto in high resolution, an orbiter will reveal the mysteries of Pluto’s far side, which, as noted in this Nature article, already shows signs of liquid water, indicating the subsurface ocean might be global.

Tonight, at 7:30 pm Eastern time, show your support for Planet Pluto by listening to a presentation by Alan Stern for 28th parallel productions via Facebook Live here: https://www.facebook.com/28thParallelProductions/ .

The IAU is learning the hard way that they cannot force a scientifically bad decision on the whole world. Planet Pluto lives, now and forever!

Posted by Laurel Kornfeld at 5:31 PM No comments:

Explaining glaciers of solid methane and nitrogen on Pluto

Posted by Laurel Kornfeld at 2:56 PM No comments:

ZME Science Article: Should Pluto be Promoted to a Planet Again?

This article presents more evidence of how much the tide has turned in Pluto's favor nearly 14 years after the IAU vote debacle. It even includes a tweet of mine from April 2019 regarding a public online vote on Pluto's status held after that month's debate between Alan Stern and Ron Ekers of the IAU.

Posted by Laurel Kornfeld at 11:19 PM No comments: