Posted by Laurel Kornfeld at 6:27 PM No comments:

Posted by Laurel Kornfeld at 12:08 PM No comments:

I♥Pluto Festival 2022 | The Rivers and Seas of Titan

Posted by Laurel Kornfeld at 2:04 PM No comments:

I♥Pluto Festival 2022 | Next Step In Our Space Odyssey, Stumbling Upon L...

Posted by Laurel Kornfeld at 4:15 PM No comments:


Ninety-two years ago today, on February 18, 1930, Clyde Tombaugh discovered the planet Pluto while blinking photographic plates of the night sky taken several nights apart at Lowell Observatory in Flagstaff, Arizona. In the decades since then, Pluto’s discovery has become more appreciated and more celebrated than he could have imagined on that day.

Once again, the Lowell Observatory is celebrating the anniversary with a multi-day “I Heart Pluto” festival. This year’s is a hybrid event, with many online presentations as well as an in-person evening of entertainment and activities tonight at the Orpheum Theater and a historic walk tracing the steps Clyde Tombaugh took on that day following his discovery. Tombaugh actually spent that evening at the very same Orpheum Theater.A source at the observatory informed me that tonight’s presentation will be recorded and placed online in the near future.While more people than ever are coming to appreciate and celebrate this small, unique planet, something interesting is happening. Supporters of the IAU planet definition and of Pluto’s demotion constantly argue that few people care about Pluto’s planet status, that only a few “holdouts” refuse to accept the demotion.Yet every time Pluto is in the news, this claim is proven to be blatantly false.This week, Edward Gleason of the Southworth Planetarium in Portland, Maine, who supports Pluto’s planet status, addressed the debate over Pluto’s planet status in an email message sent to friends of the planetarium. The next day, he followed up with a post stating that he received multiple responses on this issue, “all of which were in equal measure thoughtful and passionate.”

He even quoted my response to his question, "The IAU General Assembly is convening its next meeting this August in Korea. Will Pluto's planetary status be then reinstated?" in which I noted that we don’t need the IAU for Pluto to be considered a planet.I wrote: “Statements like this assume that only the IAU has the right to bestow planet status on an object. This is essentially an appeal to authority. The IAU planet definition should not in any way be privileged above other definitions currently in use, such as the geophysical definition. I have long suggested planetary scientists form their own organization and adopt their own definition of planet. We do not need the IAU to issue a decree or stamp of approval for Pluto to be considered a planet. Unfortunately, the media has portrayed the IAU decision as fact rather than as what it really is--one side in an ongoing debate.”And he agreed, stating: “Indeed! That line does presuppose that the IAU stands as the final authority on all such matters.   We know that most planetary scientists have ignored the IAU's designation, a fact little mentioned by most media sources.  I stand cheerfully corrected.”

Gleason’s experience receiving so much feedback regarding Pluto is not unique. Planetary scientists and amateur astronomers who do public presentations and/or write articles on this subject are regularly asked about Pluto and its planet status. Fascination with this tiny, active world, and healthy skepticism about the IAU decision has only grown stronger over the last 15-and-a-half years.When someone, whether a scientist, a writer, an amateur astronomer, or a member of the public claims that no one cares about Pluto’s status, what they are really saying is that they think no one should care. It usually means they support the IAU planet definition and its claim that dwarf planets are not planets and want to have the last word on the issue.And their related statement, that Pluto doesn’t care what we call it, is irrelevant. The issue isn’t whether Pluto cares, but why we should care. As Philip Metzger notes, taxonomy is how we make sense of the world. It is integral to science. The IAU’s taxonomy is flawed because it lumps two very different types of objects—asteroids and comets on the one hand, and dwarf planets on the other—into the same category of non-planets.Too often, one will read articles online that claim our solar system has just two types of planets—terrestrials and jovians—and/or cite the names of the four terrestrials and the four jovians, then add in the asteroid belt and Kuiper Belt to describe the solar system.But objects like Ceres and Pluto are far more than just small objects in belts, and they differ significantly from the majority of the tiny objects in those belts. Describing the solar system as having just rocky planets, gaseous planets, the asteroid belt, and the Kuiper Belt erases the existence of these small planets, which have more in common with rocky worlds like Earth and Mars than they do with KBOs like Arrokoth.In a presentation on the glass plates which were used in Pluto’s discovery, one of Lowell Observatory’s speakers who knew Clyde Tombaugh reported that Tombaugh said he immediately recognized the tiny dot whose position moved against the background stars from one plate to another via the blink comparator. That tiny dot is part of a huge star field, and most people aren’t likely to find it even after hours of blinking the two plates.Pluto was discovered in a unique way, by a very unique, intelligent, and skilled individual. The people of the world deserve to know about this amazing, very much alive little planet. Typically, the more they learn, the more their fascination grows.In spite of the IAU’s decade-and-a-half false narrative, the people have spoken. And they continue to overwhelmingly recognize Pluto—and all dwarf planets--as a planet.
Posted by Laurel Kornfeld at 3:19 PM No comments:

Posted by Laurel Kornfeld at 2:49 PM No comments:

Posted by Laurel Kornfeld at 1:14 PM No comments:

Posted by Laurel Kornfeld at 4:01 PM No comments:

Posted by Laurel Kornfeld at 5:23 PM No comments:

Posted by Laurel Kornfeld at 7:49 PM No comments:

Posted by Laurel Kornfeld at 11:06 PM No comments: 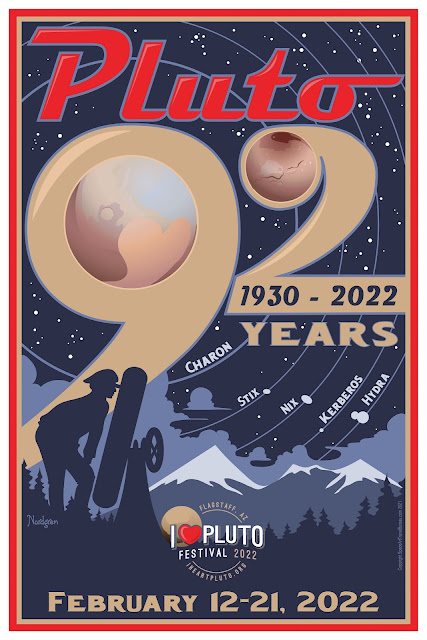 Lowell Observatory's annual "I Heart Pluto" Festival, celebrating the 92nd anniversary of Pluto's discovery on February 18, 1930, at the observatory in Flagstaff, Arizona, will this year be a combination of in-person and virtual events that will run from today, February 12 through Monday, February 21. You can find the entire schedule of events listed on the event's website. Speakers include Dr. Alan Stern; Dr. Cathy Olkin; Dr. Richard Binzel, former astronaut Dr. Nancy Currie-Gregg, Alden Tombaugh, son of Pluto discoverer Clyde Tombaugh, and many more. Don't miss this annual celebration of our favorite planet!
Posted by Laurel Kornfeld at 11:19 AM No comments:

We Martians Podcast: What Makes A Planet? Interview with Dr. Phil Metzger

We Martians Podcast: What Makes A Planet? Interview with Dr. Phil Metzger

Posted by Laurel Kornfeld at 10:39 AM No comments: