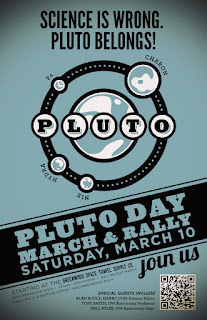 The Greenwood Space Travel Supply Co. in Seattle is once again sponsoring its annual Pluto Day March and Rally in support of Pluto's planethood, held in conjunction with the 82nd anniversary of the announcement of Pluto's discovery, on March 13, 1930. While I love the poster and am now wearing the T-shirt, it should not read "Science Is Wrong" because "science" never mandated or decreed that Pluto is not a planet. A political decision by four percent of the IAU does NOT equate to "science." This is an important distinction because there is strong scientific support for Pluto's planet status under the geophysical planet definition. The view that dwarf planets are planets too is not, as its opponents often claim, based on sentiment. It IS just as much based on science as is the dynamical planet definition that excludes Pluto.
Posted by Laurel Kornfeld at 2:43 PM No comments: