Dr. David Weintraub, author of the excellent book Is Pluto A Planet, calls for reinstating planet status to both Ceres and Pluto as the result of new information bring provided by NASA's Dawn and New Horizons mission respectively.

The public definitely agrees. In this poll, a whopping 88 percent of participants voted that Pluto is a planet!: http://www.9news.com/story/news/local/science/2015/02/17/pluto-poll-planet/23563665/?fb_ref=Default
Posted by Laurel Kornfeld at 1:11 PM No comments: 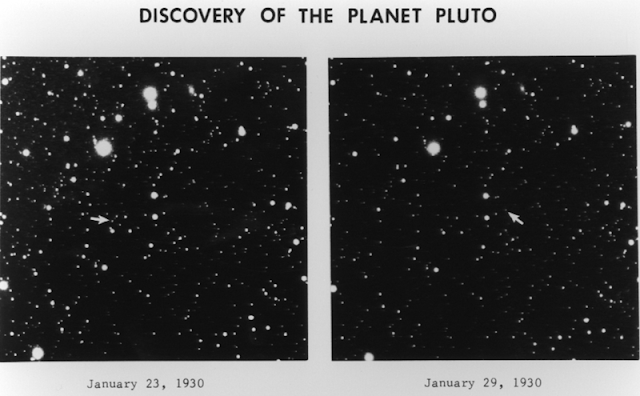 Eighty-five years ago today, on February 18, 1930, 24-year-old Clyde Tombaugh discovered the planet Pluto using a blink comparator to “blink” back and forth between photographic plates of the same section of the sky taken several days apart using the Lowell Observatory’s 13-inch astrograph—a telescope equipped with a camera.

The faint, tiny dot Tombaugh discovered moving against the background stars was so tiny and remote that telescopes of the day could not resolve it into a disk. That led some astronomers, including Tombaugh, to speculate that the object discovered was the moon of a larger planet, yet to be found.

The Lowell Observatory declared the object the planet sought in a search it sponsored since the days of founder Percival Lowell.

And in the depths of the Great Depression, excitement spread. Finally, there was some good news—a new planet found in what was then believed to be the outer reaches of the solar system.

Even more encouraging, the planet was found not by someone coming from a lifetime of privilege like Lowell, who funded the construction of his own observatory, but from a farm boy who succeeded through intelligence, determination, and grit.

In the span of a human lifetime, little Pluto has thrilled, fascinated, excited, and challenged countless people from professional astronomers and planetary scientists to children. The only experience it has not created among people is boredom.

Now, just five months from New Horizons’ closest flyby, Pluto again has celebrity status. It is everywhere in the media.

In honor of the 85th anniversary of Pluto’s discovery, the New Horizons mission released the first images of tiny moons Nix and Hydra, taken with the spacecraft’s Long Range Reconnaissance Imager or LORRI, between January 27 and February 8. The photos were taken from distances of 125 million and 115 million miles of the small planet.

With so much media attention, the debate over Pluto’s status, a matter still in limbo, inevitably resurfaces in articles both print and online.

Many of these articles point to 2006 as the time the debate over Pluto ignited, not realizing that that debate goes much further back.

Not only did the debate not begin in 2006; it also did not begin in 2001, when Neil de Grasse Tyson set up a solar system display in the American Museum of Natural History that excluded Pluto; or in 1999, when the late Brian Marsden of the IAU Minor Planet Center proposed giving Pluto a minor planet number; or even in 1992, when the first Kuiper Belt Object other than Pluto was discovered.

What so many do not know is that the debate what Pluto is began in 1930, immediately upon its discovery, and continued unabated for decades. It was not always front and center, given how little was known about this tiny world.

Only one month after the announcement of Pluto’s discovery, the New York Times reported astronomers questioning planet status. “It is now thought it may prove to be a unique asteroid or an extraordinary comet-like object,” an unnamed astronomer was quoted as saying.

Each article raised the same questions regarding Pluto’s mass, size, composition, and orbit, all of which were unique in the solar system.

Over time, Pluto’s mass and size were revised downward, until James Christy discovered Pluto has a moon, Charon, that is half Pluto’s size. The two objects are separated by only 12,200 miles. Pluto’s size had so long been overestimated because astronomers had not realized that they were looking at two objects rather than one.

Meanwhile, several opportunities to study Pluto were missed. When Voyager 1 launched in the late 1970s on a “Grand Tour” of the gas and ice giant planets, some scientists wanted to use a gravity assist from Saturn to send the spacecraft to Pluto. That option was ultimately rejected in favor of a close flyby of Saturn’s moon Titan.

When Voyager 2 completed the “Grand Tour” in 1989 with a flyby of Neptune, a group of dedicated planetary scientists, many of whom are on the New Horizons team, began advocating a mission to Pluto. At the time, Pluto was at perihelion, its closest approach to the Sun, a prime location for study.

Several times, mission plans were drawn up only to be canceled due to lack of funding, before NASA finally approved New Horizons in November 2001. More than four years would pass from then until launch on January 19, 2006.

Clyde Tombaugh lived long enough to know that a mission to the planet he discovered was in the works. In 1992, Jet Propulsion Laboratory researcher Robert Staehle approached Tombaugh asking permission to visit “his” planet.

“I told him he was welcome to it though he’s got to go on one long, cold trip,” Tombaugh said.

Tombaugh died three weeks before his 91st birthday, in January 1997. Some of his ashes are in a container onboard New Horizons. His late widow Patricia and family members attended the spacecraft’s launch.

Tombaugh did not live to see the discoveries of Nix, Hydra, Kerberos, or Styx. He died believing his planet had just one moon, albeit a large one.

At the time of Pluto’s discovery, Tombaugh was given little recognition. The Lowell Observatory’s announcement did not even mention his name, instead referring to him as “an assistant on the staff.” The name most invoked and praised regarding the discovery was Percival Lowell.

The story of Pluto and its discoverer are inextricably linked. Both are of underdogs who defied the odds to eventually gain unprecedented popularity that continued over decades. A planetarium instructor recently listed Pluto as one of the leading subjects about which children ask her. The mysterious little planet on the frontiers of the solar system continues to inspire, to elicit awe and wonder, to generate tremendous interest, even in today’s world of short attention spans.

“Professor Tombaugh’s discovery was far ahead of its time, heralding the discovery of the Kuiper Belt and a new class of planet. The New Horizons team salutes his historic accomplishment,” noted New Horizons principal investigator Dr. Alan Stern.

If only Tombaugh could see his discovery now, moons and all!

Here are some of the latest celebrations of Pluto:

In Flagstaff, Arizona, where Pluto was discovered: http://m.naztoday.com/mobile/news/flagstaff-celebrates-th-anniversary-of-pluto-s-discovery/article_64792910-b70f-11e4-ad42-7bed5a5e3b39.html and

By the New Horizons mission: http://solarsystem.nasa.gov/news/display.cfm?News_ID=48823 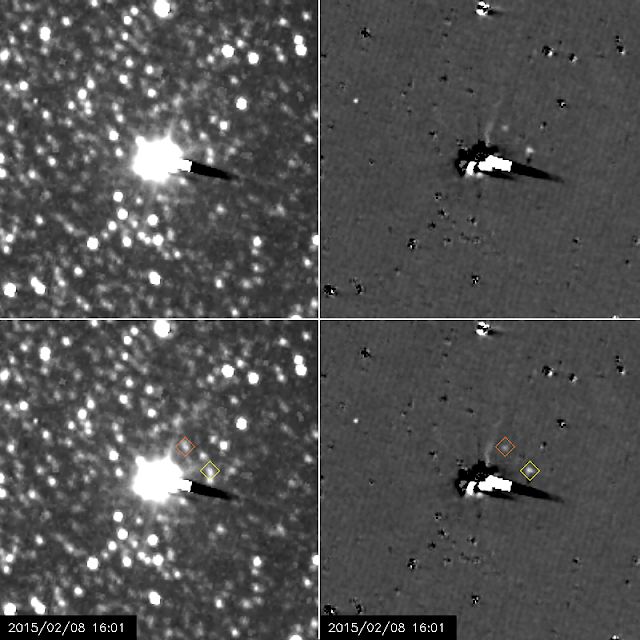 Posted by Laurel Kornfeld at 9:47 PM No comments:

Another Poll: Vote for Pluto to be classed as a planet!


Once again, elementary school kids prove themselves smarter and more understanding of the solar system than the leadership of the IAU and 424 particular members. Click on this link, and scroll down to find the poll question, then vote yes, Pluto is a planet!

http://www.buzzfeed.com/kellyoakes/pluto-should-be-a-planet?fb_action_ids=10153230415338949&fb_action_types=og.comments&fb_source=action#.kx7JklEZW
Posted by Laurel Kornfeld at 5:56 PM No comments:

The View from New Horizons: A Full Day on Pluto-Charon | NASA

The View from New Horizons: A Full Day on Pluto-Charon | NASA
Posted by Laurel Kornfeld at 5:18 PM No comments:


Make sure to watch the video of comments by Tombaugh's son Alden and daughter Annette.

http://pluto.jhuapl.edu/News-Center/News-Article.php?page=20150204
Posted by Laurel Kornfeld at 4:34 PM No comments: