Pluto: Science has not spoken, and no one has to move on


The case for Pluto’s planethood is not at all grim--in spite of statements to that effect in articles published this month in the Australian-based publication Science Alert and in Forbes.com.

Both articles—the Forbes.com one by astrophysicist Ethan Siegel and the Science Alert one by writer Fiona MacDonald--are statements of interpretation rather than fact because they begin with a foregone conclusion that science somehow precludes Pluto—and dwarf planets in general—from being considered a subclass of planets.

This premise, written in wording that makes it appear to be factual rather than interpretive, is misleading and assumed to be true from the outset when this is hardly the case.

But science has not spoken. Ethan Siegal, one scientist whose field of study is not planets has spoken, and claimed to do so in the name of “science.”

And contrary to MacDonald’s claim, he hardly “penned a thorough takedown” of the argument for Pluto’s planethood.

Like most of the four percent of the IAU who voted for the controversial 2006 planet definition, Siegel is not a planetary scientist. His fields are galaxies and cosmology. This should not be at all understood as disrespectful to him. It just means he is not the go to person for determining what a planet is any more than Alan Stern is the go to person for defining the Big Bang.

In saying, “When it comes to planetary science, geophysics isn’t enough. In astronomy, the three rules of real estate also apply: location, location, location,” he self-identifies as a dynamicist. There is nothing wrong with that. What is wrong is his inherent assumption that his side of the planet definition debate is the only scientifically legitimate one, when this is not the case.

The same is true for MacDonald’s statement that “trying to make it (Pluto) a planet again could hurt scientific progress going forward.”

Legitimate debates between those holding conflicting perspectives—in this case, dynamicists versus geophysicists—do not hurt scientific progress. What does hurt such progress is blind acceptance of one self-appointed group as the only “authority” on an issue.

In a February 20 article about the proposal for a geophysical planet definition being presented at the Lunar and Planetary Sciences Conference, writer(s) identified as BEC Crew state, “Of course, nothing changes until the IAU makes a decision…”

Therein lies the real problem. Such a claim amounts to circular reasoning: A thing is true because the IAU says it is true, with no room for anyone, including those who actually study planets, to legitimately disagree.
For geophysicists, an object’s intrinsic properties, not its location, take precedence when it comes to definition.

Siegel’s primary objection to the proposed geophysical definition is that it would make over 100 objects in the solar system, including moons and asteroids, planets. This objection is based largely on the notion that our solar system cannot have “too many planets,” that having a large number somehow devalues the term “planet.”

Objections to more than a limited number of planets go back several centuries. Galileo’s reference to the four largest moons of Jupiter, which he discovered, as planets, raised major objections beginning with the church, whose position was there could only be seven perfect planets—the seven known since ancient times, which include the Sun and Moon but not the Earth.

When William Herschel discovered Uranus in 1781, his first instinct was to consider his discovery a comet, again due to the strong societal belief that no planets could exist beyond Saturn.

Contrary to Siegel’s claims, one can be honest and reject the notion that “there are very clearly eight objects that are different from all the others” in our solar system, as this is far from the case.

Earth actually has much more in common with Pluto than it does with Jupiter. Both Earth and Pluto have solid surfaces and are geologically layered into core, mantle, and crust; both have large moons formed via giant impact; both have nitrogen in their atmospheres; both have floating glaciers; both have volcanism, and like Earth, Pluto may harbor an ocean (though a subsurface one). In contrast, Jupiter is composed largely of hydrogen and helium, much like the Sun, and has no known solid surface. It has its own “mini solar system” of rings and moons. Putting Earth and Jupiter in the same category while excluding Pluto makes no sense.

Ceres, Jupiter’s moon Europa, Saturn’s moons Enceladus and Titan, Neptune’s moon Triton, and Pluto have different dynamics in terms of what and where they orbit, yet they all are similar in being “ocean worlds” with heat sources that allow for subsurface liquid water that could potentially be home to microbial life. Should these similarities in their intrinsic properties be rejected because their locations are different?

In terms of location, Pluto may well revolutionize our notion of what a star’s habitable zone is. No one expected a world orbiting so far from its star to be capable of hosting life, yet with an underground ocean, Pluto may do just that.

Even a rogue planet that orbits no star is still a planet based on its intrinsic properties.

Siegel cites dynamicist Jean Luc Margot’s 2015 schematic to emphasize a dividing line between planets and non-planets based on orbit clearing. However, Margot’s graph is clearly based on a 2002 paper by Alan Stern and Harold Levison that acknowledged a distinction between objects that gravitationally dominate their orbits and those that do not but never used that distinction to determine the latter are not planets.

Take a look at Margot’s graph, and notice the similarity to the one by Stern and Levison below it: 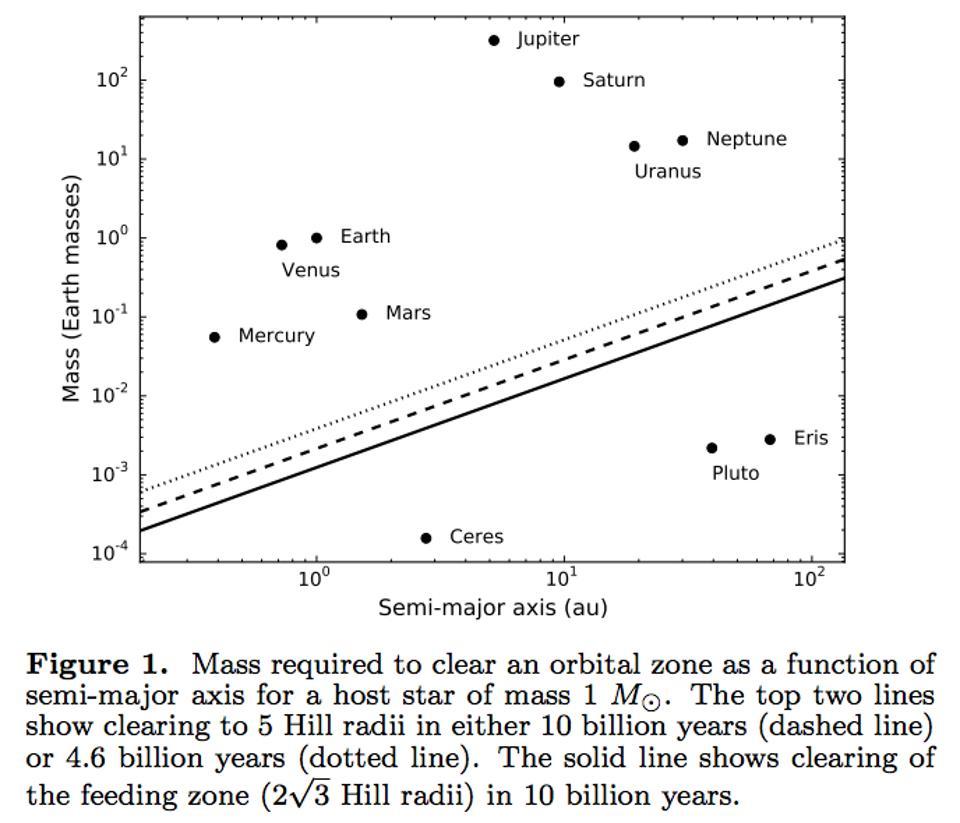 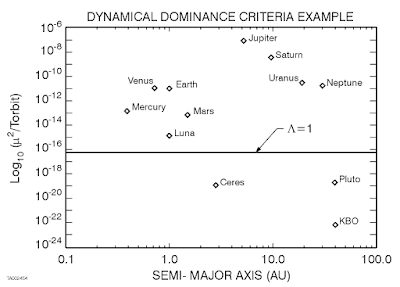 With the exception of Eris, which had not yet been discovered when Stern and Levison’s paper was published, and the latter’s inclusion of Earth’s Moon, Margot’s dividing line is essentially the same as that of Stern and Levison, who designated objects above the line as “uber planets” and those below it as “unter planets” but never said the latter were not planets at all.

Scientifically, we can recognize this division without precluding those below the line from being considered planets. How? By recognizing that some planets gravitationally dominate their orbits while others do not. The former are called classical planets while the latter are called dwarf planets. Both, based on their intrinsic properties, fall under the broader umbrella of “planets.”

The IAU definition is insufficient in that it puts location over an object’s intrinsic properties. Maybe what we need is a planetary classification system that incorporates both intrinsic and extrinsic properties. Redesignating dwarf planets as a subclass of planets is an easy way to move in that direction. Some scientists have considered establishing a planetary classification system similar to the Herszprung Russell Diagram for stars or to the Star Trek system, that establishes multiple planet subcategories based on both an object’s intrinsic properties and location.

As for the hypothetical Planet X possibly lurking in the outer solar system, its discovery, mass, and orbital parameters do not change anything about Pluto or dwarf planets. Finding such a world would actually strengthen the position of those who recognize our solar system can and does have many planets.

Advocates of a geophysical planet definition do not need to “move on” or be patronized with statements telling them to do so.

All scientists—unless they just arrived from Vulcan—have biases and opinions. Good science is about acknowledging the difference between fact and interpretation, not imposing interpretation on the world and calling it fact. That is a disservice to everyone.

Posted by Laurel Kornfeld at 10:31 PM

For me, it seems the idea of what is and is not a planet for many is rooted in the Astrology origins of Astronomy. They want to protect the term "planet" based on old world views. We need criteria that removes ourselves from the need to maintain the status quo established by ancient superstitions. We need well-defined classifications that work regardless to emotional connections. Is Pluto a planet? Why not. It actually has more in common with Earth than Jupiter does. The current IAU rules were designed to preclude Pluto from being a planet, even as they use the term planet within its classification. It's nonsensical.