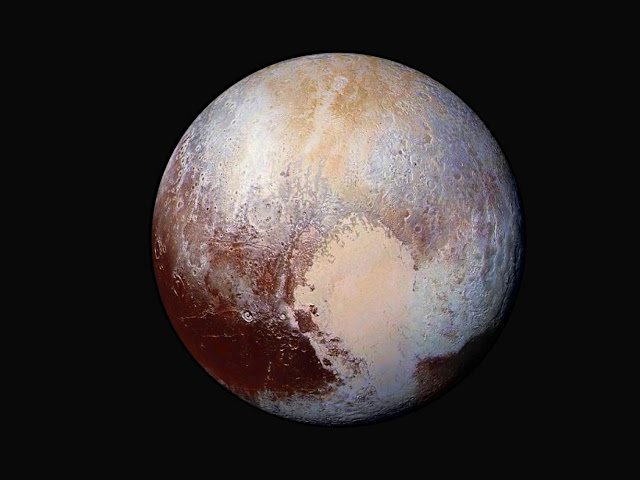 Planetary scientist Phil Metzger and other proponents of the geophysical planet definition, including Kirby Runyon, Alan Stern, Mark Sykes, William Grundy, Jim Bell, Charlene Detelich, and Michael Summers on October 22 scheduled for publication in the journal Icarus arguing that moons should be considered a subclass of planets.In response, astrophysicist and science writer Ethan Siegel, author of the blog Starts with a Bang wrote an article that centers not on moons, but on Pluto, once more repeating the claim that Pluto can never again be classed as a planet. While this piece goes into extensive scientific detail about the formation of stars and solar systems, in the end, it falls back on the same old argument, accusing supporters of the geophysical planet definition of being motivated by emotion rather than by scientific concerns.The article opens with a minor error, stating Pluto was discovered in 1929 when the actual discovery date is 1930. But it is when he gets to describing planetary systems and the various boundaries within them that his argument begins to fall apart.After noting the “soot line,” the location in a solar system subject to large amounts of radiation and unable to hold onto volatiles, and the “frost line,” the location in a system where temperatures are cold enough for volatiles to condense into solid ice grains, Siegel adds a designation of his own, the “Kuiper line,” which he describes as a region beyond a system’s massive planets. In this area, he states, “these objects are composed almost exclusively of various ices and volatiles.”He then goes on to say, “Objects beyond the Kuiper line will be made mostly of volatile ices, and all of those volatiles would likely boil away in short order if they are brought inside the frost line” and "But out beyond the final large, massive body that forms — the last one to sweep out all the other objects that share its orbit — are a large number of mostly icy bodies of various masses. These objects are composed almost exclusively of various ices and volatiles, and in our solar system they include the Kuiper belt and, beyond that, the Oort cloud."These statements are incorrect in terms of the composition of objects like Pluto, objects large enough to be rounded by their own gravity, in the outer regions of the solar system. These objects are composed mostly of rock, not ice. Pluto is estimated to be 70% rock, and Eris, which is marginally smaller but denser, is likely even more rocky.

The claim that these objects are composed entirely of volatiles that would boil away if brought closer to the Sun is the same argument that labels Pluto a “large comet”—which it is not. Comets are much smaller than any dwarf planet and are composed largely of volatiles that do boil away on close approach to the Sun. Rock, however, does not do that. If brought closer to the Sun, Pluto would lose its atmosphere but still remain intact.Any object brought close enough to the Sun or its parent star would develop a tail due to outgassing. Mercury has a tail, as do hot Jupiters—giant exoplanets in close orbits around their stars. Some of those hot Jupiters are on unstable orbits and will eventually fall into their stars. Forget orbit clearing; if an object cannot even maintain its own orbit without eventually spiraling to destruction, should it be considered a planet?Of course, the IAU planet definition does not address exoplanets, so the question of hot Jupiters is never addressed. Such an object would be a planet under the geophysical definition until it is destroyed, at which point it would no longer exist.Siegel goes on to mischaracterize Pluto, with the following: "Still, based on what we can observe in the Universe, the fact remains that Pluto is completely unremarkable, as far as objects found beyond its solar system’s ‘Kuiper line’ go. It has a perfectly normal mass, radius, composition, and formation history, and is a member of a population of objects that has very little in common with objects like terrestrial planets like Venus, ice giant planets like Neptune, and gas giant planets like Jupiter."This description is incorrect in terms of the claim that Pluto has little in common with terrestrial planets. Pluto actually has a very similar composition and geological features and processes as the rocky planets have. These include interaction between atmosphere and surface, layered atmosphere, windswept dunes, active geology, floating glaciers, possible cryovolcanism, and a likely subsurface ocean. There are processes that occur on Pluto found elsewhere in the solar system only on Earth and Mars.NONE of the terrestrial planets have much in common with the gas giants in terms of composition. Jupiter and Saturn are composed largely of hydrogen and helium, like the Sun. They have no solid surfaces. Uranus and Neptune have water, methane, and ammonia in addition to hydrogen and helium and small cores made up of rock and ice. The terrestrial planets have more in common with Pluto than they do with the gas and ice giants.The real problem with Siegel’s argument comes at the end of his article. He states, "However, it’s a far worse offense to water down a previously useful definition to the point of universal uselessness than it is to exclude a subset of one’s “favorite” objects from a designation that was previously assigned to them."

What is this “previously useful definition?” Is it the IAU definition, which Siegel himself recognizes as having the “terrible flaw” of applying only to objects that orbit the Sun? He quotes Jean Luc Margot, who published a paper extending the IAU definition to exoplanets, but Margot’s position does not represent that of most planetary scientists or that of the IAU, which has chosen to remain silent on this issue for 15 years, as the number of exoplanets discovered increased from 300 plus to 4,500 plus.While Siegel spends a lot of time on the science of star and solar system formation, the crux of his argument, as revealed here, is that planetary scientists who favor a geophysical planet definition are motivated by emotion--preference for their "favorite planet." This is absolutely false and is a common argument of those who support the IAU definition.It is not wanting a "favorite"--Pluto--to be classed as a planet that is motivating those who support a geophysical definition but preference for a definition that puts primacy on an object's intrinsic properties over its location. This does not mean location does not matter. Location can be recognized in establishing subclasses of planets--satellite planets, rogue planets, etc. It just means location should not be the primary factor in defining what a planet is.

One could easily argue that Siegel, who responds to an article about the classification of moons by centering his article on Pluto, who repeats Mike Brown’s insistence that Pluto can “never again” be considered a planet, is the one motivated by emotion, in this case, by wanting his view to prevail and the debate to be shut down.In short, Siegel may want Pluto to never be up for consideration as a planet again, but that does not mean there aren’t scientifically sound reasons for such consideration to occur.

Posted by Laurel Kornfeld at 4:29 PM